Before you adopt a boxer, you should be aware of some of the health issues that the breed often faces. The list of diseases below is not intended to be a comprehensive list of ailments your boxer might acquire, but is intended to help make you aware of some of the medical conditions boxers are especially susceptible to developing. It is important that you and your vet monitor your boxer’s health carefully and regularly, since the sooner you catch a problem, the more easily and successfully you will be able to treat it. 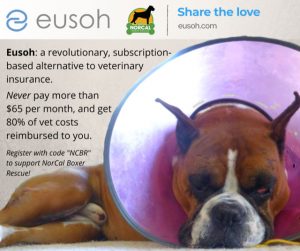 Pet Insurance Alternative: Eusoh is a revolutionary, affordable, subscription-based alternative to veterinary insurance.  Subscribers become group members who share veterinary costs with each other.  As a member, you make an initial $48 deposit and pay a $17/month subscription fee.  80% of veterinary costs are reimbursed to group members, with funds drawn evenly from all members’ $48 deposit.  At the end of each month, you pay as much as is needed to restore your balance to $48.  This means that, at most, you will pay $65 per month ($17 deposit plus $48 balance) to remain a member.  However, your contribution will vary by month and may be as low as $17.

Subscribe now, and enter the code “NCBR!”  NorCal Boxer Rescue will receive $40 for each referral! 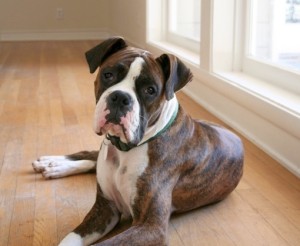 Dogs can get the same cancers as people can (plus a few others!). Unfortunately, compared to other breeds, boxers are at a very high risk for several types of cancer, including mast cell tumors, lymphomas, brain tumors, and skin hemangiosarcoma.

While mast cell tumors can occur anywhere in the body, they are a very common type of skin tumor in dogs, and boxers are more prone to them than are many other breeds. Fortunately, boxers also tend to have less aggressive mast cell tumors, which, if caught early, can often be treated successfully with surgery alone. However, mast cell cancer varies widely in its appearance and its outcome, so all lumps and bumps should be examined by a veterinarian as soon as they are noticed.

You can read more about mast cell tumors at the National Canine Cancer Foundation.

You can read more about lymphoma at the Purdue University College of Veterinary Medicine.

Brain tumors are more common in dogs than in people, and, unfortunately, boxers are overrepresented among canine brain tumor cases. Boxers and other snub-nosed breeds like Boston Terriers are at especially high risk of developing gliomas, which occur inside the brain as opposed to around the outside. Seizures are often the first sign of a brain tumor, especially if the seizures begin when the dog is an adult, but symptoms vary depending on where the tumor is located.

You can read more about canine brain tumors at the UC Davis College of Veterinary Medicine.

Hemangiosarcoma is a cancer involving the cells that line blood vessels. Hemangiosarcoma can occur anywhere in the body and tends to spread rapidly. Boxers are more likely than other breeds to develop hemangiosarcoma of the skin. Depending on its location, if caught early enough, skin hemangiosarcoma may be treatable with surgery.

You can read more about skin hemangiosarcoma at the National Canine Cancer Foundation.

Boxers are prone to several heart diseases, and while they are not curable, it’s still important for your vet to monitor your dog’s heart health. If your vet determines that your dog suffers from a heart condition, use of cardiac drugs as your vet prescribes and avoidance of strenuous exercise can prolong your dog’s life.

Boxers are uniquely susceptible to developing boxer cardiomyopathy, a condition in which fat replaces cardiac tissue, usually occurring in the right ventricle of the heart. Symptoms of boxer cardiomyopathy include weakness, fainting, and irregular heartbeat. However, it may also be symptom-free. Sudden cardiac death can occur due to cardiomyopathy.

You can read more about boxer cardiomyopathy at The Big Hearts Fund.

Boxers and a few other large breed dogs are at increased risk of developing subaortic stenosis, a disease characterized by the narrowing of the area under the aortic valve. Subaortic stenosis can be mild, moderate, or severe, and worsens with time. Some symptoms include fainting, irregular heartbeat, and exercise intolerance. A heart murmur, though it may be benign (or “innocent”) is often the first sign found on clinical examination. As with boxer cardiomyopathy, subaortic stenosis increases your dog’s chances of sudden cardiac death.

You can read more about subaortic stenosis at the Cornell University College of Veterinary Medicine.

Mange is an infection of skin mites that often is confusing to clients. The issue arises because there are two conditions called mange, and while both involve mites they affect dogs very differently. Fortunately, it is easy to clarify the diseases and recent innovations in treatment make solving the problem much simpler than in the past.

Demodex mites live in hair follicles within the skin. They are found normally in many species including cats and humans as well as dogs, and cause no problems or disease. These mites are not infectious at all. Sometimes, especially in puppies when the immune system is developing, an overgrowth of mites occurs and hair loss, greasy skin, and odor can develop. This is often located around the eyes, on ears and other areas of the face, but can occur in other locations as well. These lesions are usually not itchy unless secondary bacterial infections occur. Disease can occur in older animals as well especially in those that have some other underlying disease that disrupts immune defenses. Diagnosis is based on appearance, age of the dog and a skin scraping test; easily done at most veterinarians at very low cost.

Sarcoptic mites live on the surface of the skin and behave very differently. They are very infectious, and extremely itchy. Infection is often acquired from wild animals, in particular foxes but can be caught from other dogs. There are sarcoptic mites that affect most species, including humans, and cross infection can occur but is self-limiting, resolving without treatment. Diagnosis is more difficult as the mites are fewer and harder to find with scraping. Fortunately, sarcoptes is rare.

In the past, a variety of treatments existed for both conditions. Amitraz dips, oral ivermectin and oral milbemycin were used to varying success, but often these diseases were frustrating and could be difficult to eliminate. A new class of drugs was developed a few years ago, the isoxazolines. These are sold under the names Nexgard, Bravecto, Simperico and others. They are given orally, at intervals that vary with each drug from monthly to every three months. They are effective in eliminating fleas, ticks and most mite species. These drugs have essentially eliminated the need for any other approach to treatment for both demodex and sarcoptic mite infections. Since these medications are extensively used for routine prophylactic parasite control in dogs, veterinarians are seeing far fewer cases of mites in our clinics.

Degenerative myelopathy is a painless, progressive neurological disease similar to Lou Gehrig’s Disease in humans. It typically first manifests as weakness of the hind legs, and gradually will result in total paralysis. While degenerative myelopathy has no cure, there are tools available that can help extend your dog’s mobility and quality of life.

You can read more about degenerative myelopathy at the Canine Genetic Diseases Network.

Hypothyroidism is fairly common in boxers and many other breeds. Some common symptoms of hypothyroidism include a dull and thin coat, skin flaking, weight gain, and lethargy. Hypothyroidism is diagnosed with bloodwork, and is typically treated easily and inexpensively with daily medication.

You can read more about hypothyroidism at Doctors Foster & Smith Pet Education.

Corneal ulcers occur when the outermost layer of the eye is damaged and breaks. In most dogs, corneal ulcers are the result of physical trauma, and they will heal with eye drops that your vet prescribes. However, in boxers and other snub-nosed breeds, corneal ulcers are often spontaneous, recurring, and resistant to healing. In these cases, they may require surgical treatment such as debridement or grid keratotomy to heal.

You can read more about corneal ulcers at the Massachusetts Society for the Prevention of Cruelty to Animals.

Colitis is any inflammation of the colon, typically resulting in diarrhea. Boxers are prone to a particularly severe and ulcerative type of colitis, which requires special treatment.

You can read more about boxer colitis at petMD.

Many boxers have environmental allergies or food allergies or intolerances. Allergies in dogs often result in itchy, raw skin. If you think that your dog might have allergies, talk to your vet about managing the problem and identifying the source of your dog’s allergies so that the allergen can be avoided.

You can read more about canine allergies at VCA Animal Hospitals.

Deep-chested dogs, including boxers, are more likely than others to develop bloat, in which the stomach fills with air, and stomach torsion, in which the stomach twists around itself. Together, these conditions are called GDV. GDV is a medical emergency requiring immediate veterinary attention. Some classic signs of GDV include unproductive attempts at vomiting, a hunched over posture, an obviously distended stomach, salivating, and pacing. However, dogs may not exhibit all or any of these symptoms. If you are at all concerned that your dog might be experiencing GDV, do not waste time in getting to the vet, since without rapid veterinary intervention, GDV can kill your dog within hours. Although it’s not understood what causes GDV, it is generally recommended that you avoid feeding your dog immediately before or after exercise to reduce your dog’s risk of suffering GDV.

You can read more about GDV at the American Kennel Club.

Boxers and other snub-nosed breeds are especially susceptible to suffering from heat stress and heat stroke, even at temperatures that are tolerated easily by other dogs. Your boxer should never be left outside without access to the inside of the house, should never be left in a parked car, and should always have fresh water available. It is also a good idea to avoid exercising during the warmest parts of the day. Always remain aware of your dog’s comfort level, and if he seems to be distressed or listless due to heat, cool him off with cool (not icy) water and bring him to a vet! Heat stroke can be fatal.

You can read more about heat stroke here at the Animal Medical Center of Southern California.