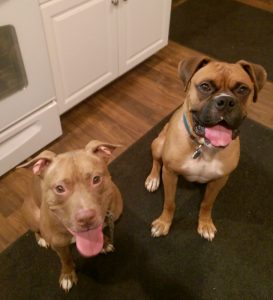 “We are so in love with our new son!! He’s such a good boy. He’s not two handfuls anymore….just one. He and Bullet love each other. They play VERY rough…crashing about the house, kicking up the rugs, but they both have great fun together. Outside, Bullet stalks Leroy like a cheetah and then charges at him and they have a huge standing chest crashing…like Titans. They’re fun to watch.

“Leroy still gets crated while we are at work, for now, and he’s had a handful of pee accidents in the house, but only when he gets excited and can’t hold it any longer. We’re learning when he needs to go out in those situations and he’s getting better about letting us know, too. It’s very apparent that he’s young. Very big…but young.

“He’s very smart and tremendously stubborn. He can sit and lay down with hand commands, and he’s learning heel and to get out of the kitchen. He will also just stare at us like we’re not even speaking if he doesn’t want to do something. He’s quite the character.

“Gary has enjoyed teaching him how to beg from him…lol…which he loves for our dogs to do. He’s also been working with him to teach him to dance like Bullet (basically just standing up on his back legs). That’s been very good to build up his hind leg muscles which were very weak and wobbly when he first came to us.

“He’s now weighing about 70 pounds and the vet wants to see him gain another 3-5 to be at a good weight for his big body.

“We are so glad the stars aligned and we were able to bring this big beautiful bundle of joy into our lives. He was a lot of work at first, but well worth the effort.” 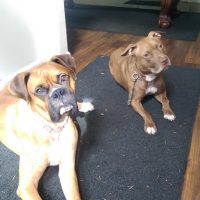 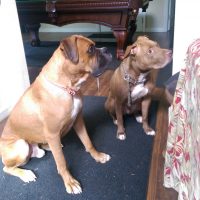 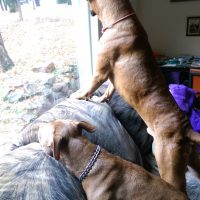 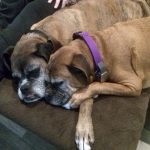 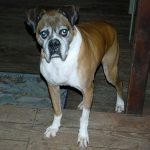