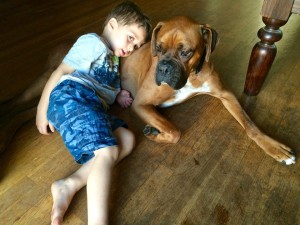 Harry (fka Buzz) was adopted by Josh and Jennifer T. After just a day they had to send us this update:

“Harry did great yesterday, and we spent the whole day just lounging around the house napping and going for walks around the block. He has been a little shy and hesitant still, but he loves his new bed and crate. If he’s not sprawling out on his bed or going for a walk he is checking on the other members of the house or following my son and daughter around while they play. Whatever his past experiences were before being rescued, he seems to be familiar with how to act around children and maintains an extremely calm and gentle disposition with the kids. He has quickly found his place in the family and seems to have accepted my three year old son as the guide. He regularly follows him on laps around the house and seems to love lots of hugs. Of course my son can be obnoxious, and when he is Harry just quietly tolerates him. Most of the time though he is eager to be near both kids or following them and watching as they play.”