Yogi found his home with Kristi W. and Keith M.!

Yogi has only been with us for a little better than 7 months, but it feels like he’s always been here, and he is a fully integrated member of the family. His official adoption in March was a no-brainer. Although blind, he has no trouble getting around. He’s not afraid to just forge ahead, come what may, and takes the inevitable bump on the head in stride.

As his first official act as a full-fledged member of the family a camping trip seemed in order. So, we packed up three dogs, two adults and a 28’ trailer and hit the road – destination Death Valley, CA.

Yogi was a trooper every step of the way. He easily adjusted to the confined space of the trailer and truck as well as the little fenced yard that we always construct for the dogs in camp. The fenced “compound” gives them some freedom while also protecting them.

Being old and blind doesn’t slow him down at all. He went on every hike and desert walk-about, seeming to enjoy the new sounds and smells he encountered. We also camped briefly by a lake on our way to the desert where he tested out his new pfd and tried kayaking for what I can only guess was his first time. He was instantly a
pro, sitting comfortably still while I paddled him around. I don’t know what he thought of the new sensation, but like everything else, he seemed happy to be along
for the ride.

I’m so happy we chose to foster, and then adopt, this sweet pup. I still shudder when I think about how close he was to being euthanized at the shelter. He only had days left. What a sad waste that would have been. Yay, Yogi! 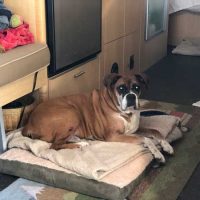 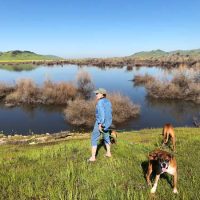 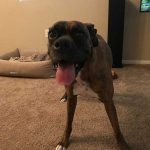 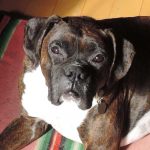