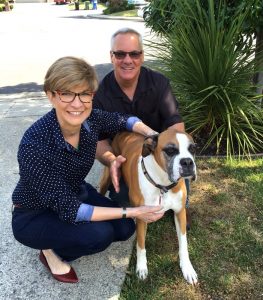 Bogart found his fur-ever home with Tammy B., who couldn’t be happier to have found him.

“Bogie is settling in at home and at work. He’s doing great and I feel so lucky to have him.

“The picture of him with his blanket was his first week with me at work he wasn’t quite sure what to do so he stuck pretty close to me until he felt comfortable. The picture of him in the wing back chair in week two in my office where he’s now feeling comfortable enough to make himself at home in my office chairs. My Bella girl used to do the same thing! He absolutely loves greeting the clients then heads right back into my office.

“The picture of him laying next to the ottoman in the living room was taken this week, he was sound asleep. I would say from his position he’s definitely settled in and feeling safe.The picture of him with his head on the round pillow is pretty funny, he was tired and didn’t feel I was going to bed soon enough so he made himself at home and caught some Z’s on my bed.

“The picture of him at the fountain is also funny to me as my Bella girl loved that fountain! Evidently he’s good with the organics I put in it to keep it clean and fresh water. On a side note he hasn’t had any allergies or breakouts since coming home with me.

“Between my employees and I we have found a couple of toys he’s really interested in and he plays quite well. He had us in stitches one afternoon chasing a motorized rat around the office. I’m still amazed that he doesn’t beg for food!

“I have a camera system in the house, last week I had a function in the evening to go to so he was in the house for about 3 hours by himself. He barked at each window for a total of about 30 minutes then settled down and went to sleep. Last night I had a meeting it’s been terribly hot so I took him home. This time there was no barking albeit window checking the first few minutes then he laid down and slept until I got home. I think he knows now that I will come home so he doesn’t have to worry.

“I want to tell both of you thank you again I love this dog as much as if I’d had him from the day he was born.He’s really a beautiful dog inside and out.” 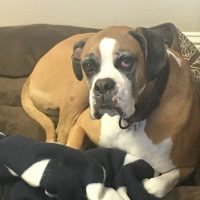 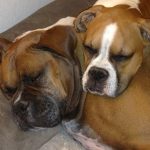 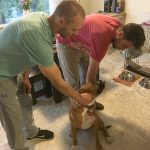