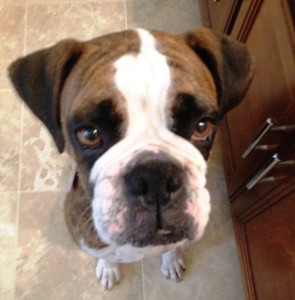 “Wow….what a year it’s been with Sammie. This time last year she was given only a few months to live.  With diligent blood test every other month, I’ve finally been able to get her liver under control.  She is on denamarin the rest of her life, which is a small price to pay.  She had a small mast cell tumor removed last month.  Since we caught it so early, the doctor was able to get the whole thing!

“Needless to say, it hasn’t been a very adventurous year of life for Sammie, but with a lot of love she is still living a happy life.  She loves to take her walks around her neighborhood (although she is starting to suffer from a little arthritis).” 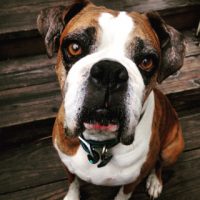 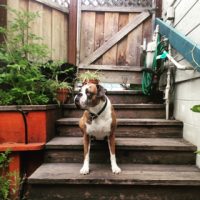 “Sammie had a relatively good year!  We had an eye ulcer we had to deal with that took forever to heal.  And she had a couple of UTI’s this year. But.  I would look to these two minor issues as a success.  She didn’t have to go under general for any procedures. Her blood work from her gallbladder surgery is still done every 2 months. But we have been on a winning streak the past year!

“Sammie got to travel to Tahoe for a summer vacation.  She got to swim a little bit.  We rented a cabin with a huge fenced backyard since she is so dog aggressive.  She enjoyed playing and running around.  She has also managed to figure out how to get out of her kennel.  She’s so smart…

“As I say every year, Mike and I are still so much in love with Sammie.  She makes our days better and she is definitely the center of our universe.  We don’t make a decision without her well being considered.  Thank you to NCBR for saving Sammie’s life the first time and placing her in our care!” 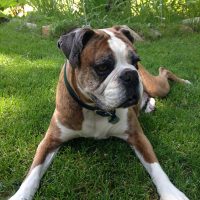