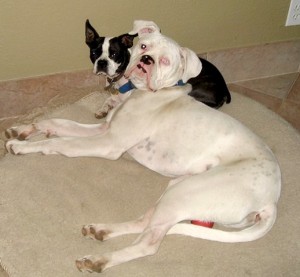 Bowie was quite a character. His puppy exhurburance could be contagious. He came into my home when his previous foster home had a personal emergency and he had to be moved. I was hesitant to take him in – he had some medical issues that meant he was going to be a long term foster. He was being boarded and he needed to be in a foster home so I agreed to take him.

From the first moment he came into my home, he never let his disability slow him down. He loved to chase after my son as my son rode his ATV in the backyard. Bowie would run and bark after him. My son would put on his riding gear and call Bowie out into the backyard and off they would go. Soon, our boston terrier would join in and all you could hear was the barking of the dogs and the ATV motor. He quickly wormed his way into all of our hearts. My husband has a definate fondness for white boxers and he would take Bowie to work with him. Bowie loved being with my husband and believe me, the feeling was mutual.

Bowie suffered from hypertrophic osteopathy – the cause for this is unknown. The outcome is a proliferation of the long bones, that is the bones grow wildly and somewhat out of control, explaining the extra bone growth at the ends of his bones. The bony growth was NOT in the joints, however, so he had actually remodeled some of this extra growth while he had grown. Our veterinarian believed the disease had stopped progressing. Unfortunately, after Bowie had been here a couple of months, it was clear he was getting worse. His bones were continuing to grow and his body was getting progressivly worse. His hind legs were getting longer and as a result, his back was bowing significantly. His front legs were getting thicker and harder as new bone was laying down. I took him back to the vet to get some new x-rays. The result was worse than we had thought. His bones were growing wildly and he was getting progressivly more deformed. He was starting to look like he was getting lame and he was starting to pick fights with my dogs – I believe it was due to his being in pain. On October 3, 2007, I took Bowie to our vet and sat with him as he crossed over the Rainbow Bridge. My one consolation is that he was truly loved the last few months of his life and he crossed over the bridge knowing he was loved and will be missed. I know now that he is running and barking in a body that is healed and he is no longer in pain.