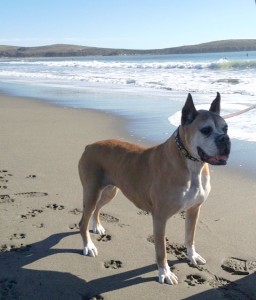 What an interesting dog you were. Honey was originally rescued by another group in 2008, but the foster thought she was too old and couldn’t keep up. They wanted to euthanize her and took her to a local vet. The vet refused and contacted NCBR. NCBR called me and asked if I could foster her. I have always had a soft spot for the seniors, so the story begins. Honey loved every dog she met, was gentle with children and people. Her character also included severe separation anxiety. She was adopted once, returned a couple months later, then adopted again and only there a day, the next adoption for her lasted a week. Her anxiety was too much for most. So she came back again, aka Boomerang. Honey officially became my dog. For whatever reason she worked and I was able to deal with her quirks and oddities. (I always said her time away during being adopted were vacations and she would always come home.)

Even after she and my other boy Oscar accidentally killed my cat, I never gave up on her. There were so many times she would challenge your patience and test the meaning of forgiveness. The only boxer I have had that destroyed a wire crate. On the other hand she loved to chase Bacchus every morning when they came back in after going potty. You would never know she was 11 – 12 years old.

Most recently she would collapse and tremor coming out of it in a haze. The frequency was increasing along with loss of hearing. She would stand and stare off into a corner barking at nothing or bark at the boys (my other 2 boxers) for no reason. After numerous visits to the vet and ultrasound, it was determined she had a large mass on her kidney and also the likelihood of a brain tumor. Her dietary issues prevented her from taking most medication and her ability to go on walks had declined very quickly. With much soul searching I made the decision to let her cross. I told her to look for Marley (my boxer who passed away in 2012), he always protected her. When I was leaving my vet office and the photo displayed on the screen was my boy Marley. It was as if to say, “I got it from here mom. She’s with me now.”

Don’t think an older dog doesn’t have much to give. It was estimated in 2008 that she was probably 6 or 7 years old, so 5 years later at 11 or 12, she had a good life. I wouldn’t trade not having her. She taught me patience, forgiveness and love.

We miss you and love you,
Janet, Bacchus & Oscar 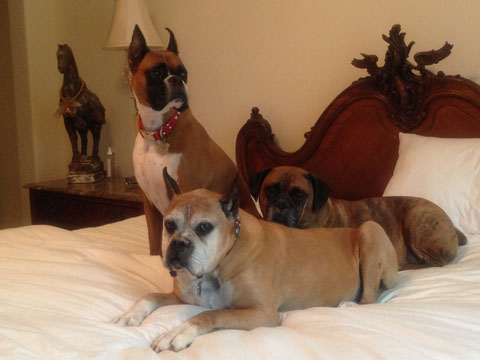 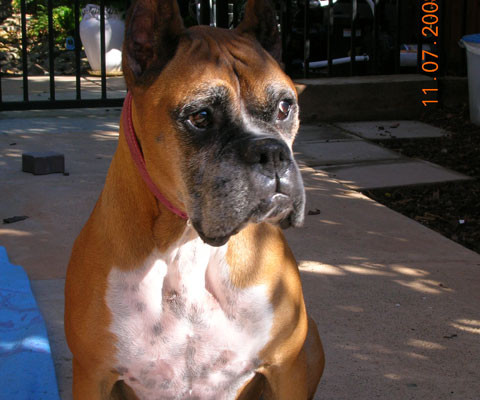 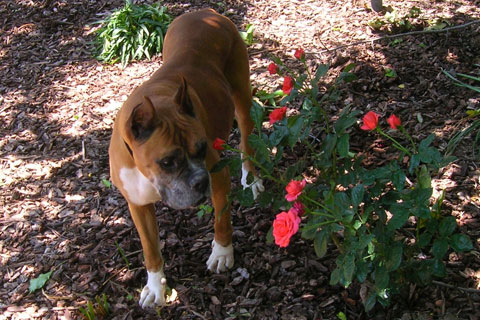