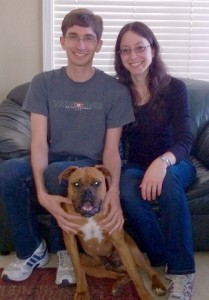 Cody is adjusting well to his new home and we’re working hard on establishing consistent rules and introducing command training. He has several toys to choose from but he loves his chuck-it ball the most. There’s lots of new things for him on walks including noisy traffic and pedestrians, but he does well. Although he gets very excited about people and so I’ll have to put some strong thought into ways to introduce him to people. He has done very well in the crate at night and when we run errands. Going for a walk at a park nearby this afternoon now that we have a car harness for him.

He is very wary about the shower when we’ve tried getting him in, but were working on coaxing him into being comfortable there. He really needs a bath soon!

Thank you again for rescuing and fostering this smart and handsome boy so that we could adopt him! 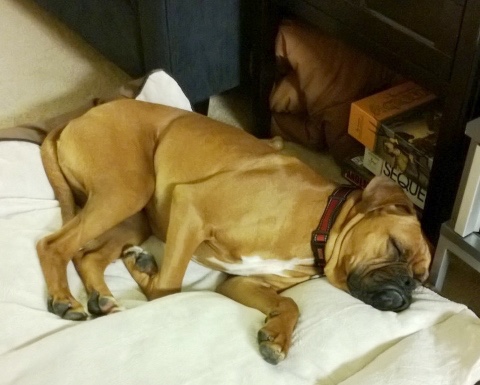 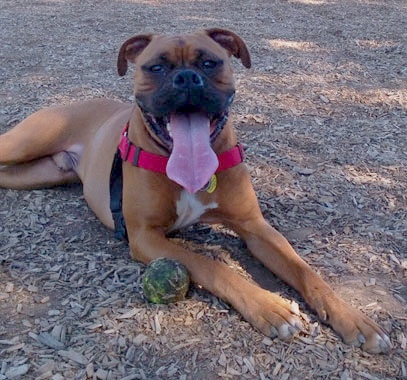 ***Cody Update 6-22-2013***
He’s doing very well and happy as ever. He loves his daily hikes and trips to the dog park. He get’s along very well with all the dogs he meets although he’s more interested in the ball I have in my hand or chuck-it than the other dogs.

Friends of Alissa and I have a German Shepard who Cody gets along very well with. Which is good because we were hoping to use them as dog sitters when the need arises.

We took Cody to Monterrey for a long weekend and he did extremely well with the hotel and walking the crowded boardwalk. We found a restaurant with patio seating and they even had a doggie menu with grilled chicken or ground beef. He ate it out of a souvenir Frisbee they gave us. He encountered his first beach and ocean including a surprise wave that splashed him in cold water.

We’ve explored quite a bit of the hiking trails in Contra Costa county but there’s still more. Briones Open Space, Lyme Ridge, and Paso Nogal are maintstays of our week. Attached is a picture of him at one of the dog parks in the area too.

His first training session went well, although he already knew most of what they taught in the class. It is mostly focused on encouraging continued working on the skills at home and in multiple environments. He initially had extreme excitement issues (not responding to commands, whining) with seeing all the dogs at training and not being able to play. But that improved with time. The trainer said part of the issue is he was still bonding with me and establishing the connection to look to me for guidance.