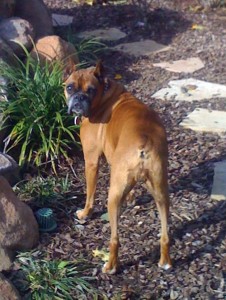 Donation made in the name of Geneva to NCBR
January 9th, 2013 from Janet Crooks
In memory of Geneva – I miss you very much

In February, 2005 NCBR contacted me and asked if I could help temporarily care for a boxer girl in need. She weighed 36 lbs., ribs showing, scars and scrapes on her legs, broken teeth and an attitude to match. She had been picked up as a stray on the streets of Oakland. She only had 5 days for someone to save her and it turned our NCBR took her in.

She had no tail at all and had endured a horrible crop job on her ears. Grumbly and protective, she was not healthy enough to be spayed, so we waited and tried to put some weight on her. I remember walking her and one of my neighbors saying “isn’t she just the saddest looking thing”. After a month went by it was time and she was spayed. She was still tiny, thin, and endured the surgery, but in pain. I remember coming down picking her up and letting her lie on me. It calmed her and she became my dog. Geneva went from a grumbly girl to my best friend. I became her protector and she was my shadow. She and Marley became pals and loved each other.

It has been an interesting journey with Geneva or Gigi or Ms. G; she has endured several surgeries for tumors, cancer in her mouth last year and remained a great dog. In the last several months we noticed her inability to stand in her rear end. Her legs became weak and she became unable to support herself. With her history, it was determined it more than likely is a form of cancer or tumor. While she loved going to visit our vet, she became more reluctant after each surgery. Rather than endure another surgery; she had 7, we decided to keep her comfortable and love her.

Today we had to make the decision to say goodbye and I miss her terribly. She has been the greatest dog and it has been my privilege to have her as a part of my family. Rescue dogs know they have been rescued. When you connect with them, they respond in kind.

I will miss your wiggly butt, your joy, love of going on walks, going for car rides, enduring my fussing over you, running in the sand and the beach, your trust and how happy you were to be around. You were the life of every party.

If you are ever lucky enough to have that connection, cherish it. Run free Geneva and wait for me at the bridge, love Janet, Cam, Marley, Oscar, Honey, Bacchus & Tazz 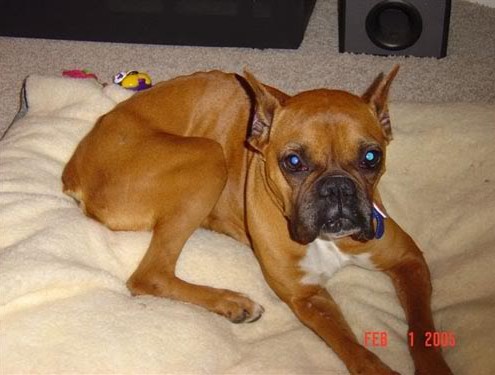