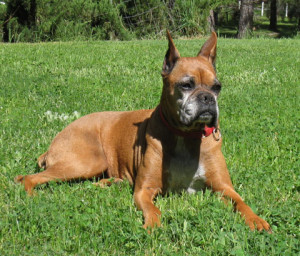 My sweet Gidgie-Goo crossed over the bridge Dec. 2, 2013. I fostered Gidget mid 2010 and I can still remember seeing her for the first time as I picked her up from the transport. A petite senior with big eyes and giant button nose. Found on the streets of large city in the California Central Valley she had obviously been bred many times and then dumped for she was of no use anymore. She was familiar with living alone, living on cement and living without love…but that all changed. I fell in love with this little girl, eventually adopted her and never looked back. Gidgie was a trooper, she learned to live with a cat, not by her own choice, but she politely listened to me that this Cat was here first and she needed to become friends and she did. She found her place in our pack and adjusted to a couple other fosters as well. She learned what love and touch was, you could put her into a trance with belly rubs and when you stopped she would look up as if to say “What, keep going”. I never saw a dog melt and relax so well in a dog bed, something she had never had before and gave her 110% enjoyment. She learned to hike and camp and travel…oh she loved to travel. She did not like the rain, nor would she even desire to put a toenail into a puddle or stream, but she did like her fleece jacket she wore every night to keep her small body warm. As she put on weight and her dry patches from cement lying diminished she moved further into her final years. My sweet girl lived through cancer surgery only to develop other issues. She became deaf and developed cataracts. She had Cushings Disease and degenerative spine disease and she moved through all of it gracefully and with great strength. She was not the prettiest girl on the block when she passed but I like to believe she is now like this picture…whole, happy and warming herself in the sun. Her ashes lie with that old cat she had to make friends with, our big boy Boxer who taught her to bark and guard the fence and three other past fur babies. There is a bell hanging from the tree above and when it rings I put my hand over my heart, give a smile and soft hello to all of them. I thank you NorCal Boxer Rescue for saving Gidget and for allowing me to be her guardian for her final 3 years, it was a pleasure.