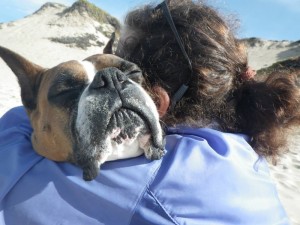 On September 18 we lost our dear, sweet Lucky – the gentlest, most tender, and most perfect soul we’ve ever known.  Lucky came to our home first as a foster dog in 2013.  He previously had been adopted to another family and after living with them over a year was, we’re told, being attacked by another dog in that home.  When he arrived at our home he was very timid and scared.  It took months and long periods of separation before he grew to trust his sister, NCBR alumna, Tasha.  But once Tasha gained Lucky’s trust, the pair complemented each other perfectly.  She was confident, playful, and bossy; he was tolerant, mild-mannered, and insecure.  Together, Tasha and Lucky brought out the best in each other, and their joyful year together as siblings and best friends was beautiful to witness.

It was as though they were always meant to be together, and – indeed – we recently learned that although we were unaware of Lucky at the time, even before he was adopted and returned to NCBR, he and Tasha had been pulled from two separate shelters at exactly the same time.  When Lucky was diagnosed with his brain tumor the day after Tasha died of lymphoma, it seemed to confirm that they were destined to be together.

Still, Lucky showed surprising bravery and strength these past 8 months since his diagnosis.  Thanks to his participation in a clinical trial, Lucky enjoyed what were probably 8 of the best months of his life.  He was never away from our sides and he – and we – treated every day together as the gift that it truly was.

We miss the contented grunts that earned him his nickname, Little Gorilla; his happy trot on walks; the way he proudly kicked up dirt all along the path; and his sheer delight every time he was offered a treat – especially cucumber or a berry from the garden.  We miss his sweet, soft face; his big, soulful eyes that watched our every move; his heavy head resting on our laps; and his sweet whiskers tickling our cheeks when he snuggled.

It’s hard to believe we knew Lucky only two years, because we feel as though we’ve loved him our whole lives.  We will love him forever. 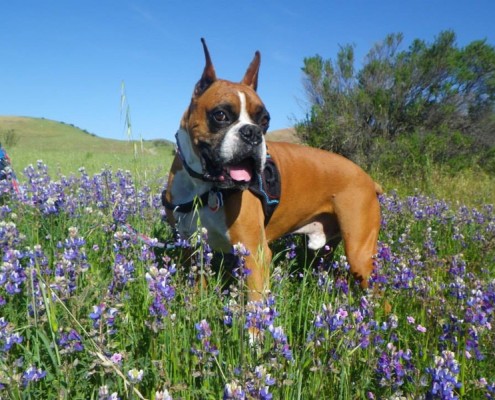 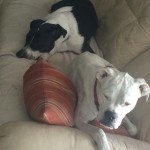 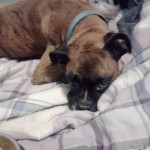