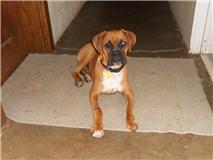 “It’s like we won the lottery twice. Nobody deserves this much joy but we’ll take it anyway.

Titan is doing wonderfully. He is a joy to have and just as you described. He seems to have settled into the home and lifestyle and he and Tilly get on very well, play alot, and have toys all over the place. He likes his car rides but has taken to barking at anyone who waves at him from cars behind us at the lights. He has a good woof.

He is a complete love sponge, as you know, and is constantly draped over me. His only complaint I think is that his patting and cuddling time has been reduced to a mere 22 hours per day – I think you might have spoilt him a little 🙂 We both adore him and he makes us laugh with his little ways and faces. He is very pushy in bed though, and I usually wake with multiple body parts hanging over the edge of the bed and a warm pup nuzzled into my back.

He is very unusual for a rescue – no hangups at all thanks to your parenting and his early start. He is a complete innocent and I don’t think he could even conceive of any ugliness in the world – all he has known is love. When I open the back of the Honda he just walks out into my arms with the implicit assumption that someone will be there to catch him. It would never occur to him that he might fall.

I took him to Dr Avery for a level set and all the girls were lined up for a pat when we arrived. They remembered him from his previous visits. I think if I ever board him there he might surreptitiously spend some nights at home with the staff 🙂 I’m sure he’ll get plenty of company anyway. Dr Avery was very excited for him.

I’m not sure if I’ve updated you, but he has a blog now on Dogster and I’ll update the photos and blog from time to time. I’m still trying to truly appreciate his personality before I write too many posts.

We’ll never get over Mac, but the big guy would be very pleased that we have Titan to care for now. I’m sure he would approve.” 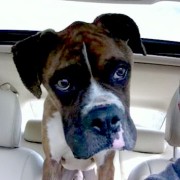 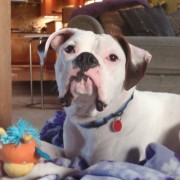