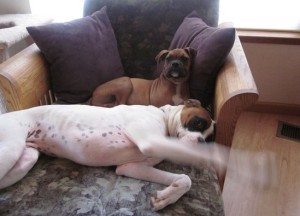 “Toby slept the whole way home in the car and boy can he snore! 🙂 Since then, he’s been adjusting better than expected to his new home. He doesn’t seem to be sad about Tilly. He ate well, he had a late lunch and then dinner, had a long nap and some outside time. He really likes the ground turkey for treats. 🙂 He explored the yard, pooped and peed a couple of times and although he’s very timid, he’s not trying to hide from us and he’ll let us pick him up and pet him. Audrey is kind of driving him crazy though. She’s so excited and she won’t leave him alone. Most of the cats have walked by him and he looks at them but doesn’t react. However, the oldest female investigated him and then hissed and growled at him. Toby kept walking towards her and didn’t back down when she hissed. I had to pick him up before he got a claw in the face. As timid as he is, he definitely has a brave side too. Right now, they are both in bed with Tom wrestling and chewing on nylabones. He seems comfortable there so we’ll just let them both sleep in the bed. Earlier, he made himself very comfortable on our love seat in the living room and that’s where he had his nap. 🙂 He’s very snuggly. The hardest part has been trying to keep Audrey calm. She’s acting like a kid at Christmas!!! I hope that she’s not too much for him.” 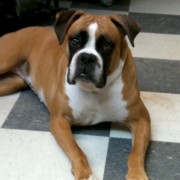