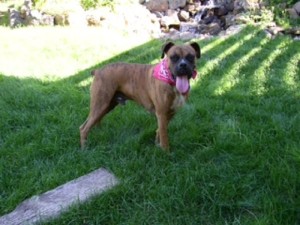 It is with sadness that I write this to you. Mike and I had to help Governor over to Rainbow bridge last month. As you know Governor came to us as our foster almost 9 and 1/2 years ago. He was a skinny, stinky boy with mange that played so rough he wouldn’t let your foot go. He had a lot of interest but, after at least 20 families met him, only one wanted him. They had a young son and I felt Gov was just too rough for them. By then I had fallen in love with him. He loved as hard as he played and after a long day he would come up and lay his big head on my shoulder and fall asleep. He was a big 75 pound lap baby with a rough and soft side. He would guard the yard with all his mite but, stop and smell the flowers that would be on the coffee table. He picked his own fruit from our loquat tree and we would eat them everyday in the spring. Although it took proper introduction to meet other dogs, he was excellent when out and about. He would walk by my side without a leash, was a good camper and great in the car. My big boy turned into a beautiful dog inside and out. He got compliments everywhere we went and I told him he could have been a dog model but, I did not want to exploit him. He was my baby and the DOG LOVE OF MY LIFE.

A few months ago he started having trouble walking and no medications where helping. I began to notice some other issues so I took him for another opinion. There he was diagnosed with a brain tumor. He was declining fast and could not even get up without help, we did not want to see him suffer. On our last day together he was able to come out side with my help and we laid on the grass together and ate loquats for the last time. I had a vet come to the house and Governor died peacefully in mine and Mikes arms. We miss him so much and our home has not been the same without him.

I wanted to say thank you to you and Nor Cal Boxer Rescue for rescuing him and giving him a chance. Without Nor Cal I know we would not have had 9 and 1/2 years with Gov and he would have not have had a life at all. It was our privilege and honer to adopt him and have him as a member of our family.

Attached are some pictures of Governor. One is of him the first day he came to us as out foster. One is of a camping trip last summer with Cait and Gov. As for Caitlan she is an old girl now and has turned sweet in her old dog age (thank God). She has been deaf for about 2 years now. Although she is not a lover she is the apple of Mikes eye and is about as happy as all getup. She runs around the yard and flies up the stairs like a young spring chicken. There is a picture of her attached as well. 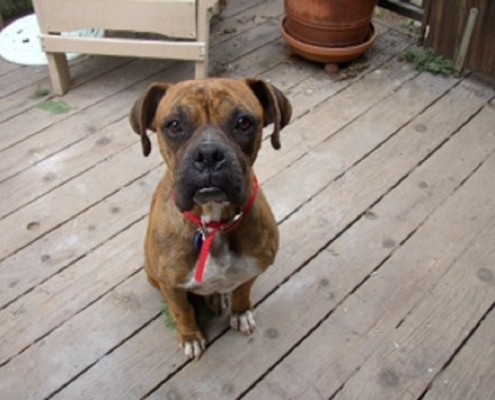 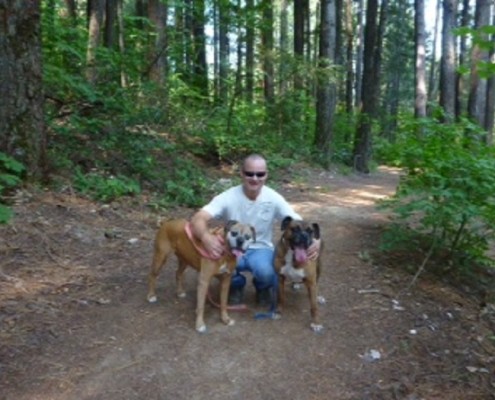 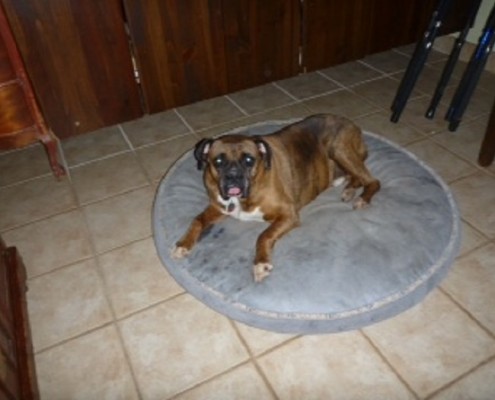 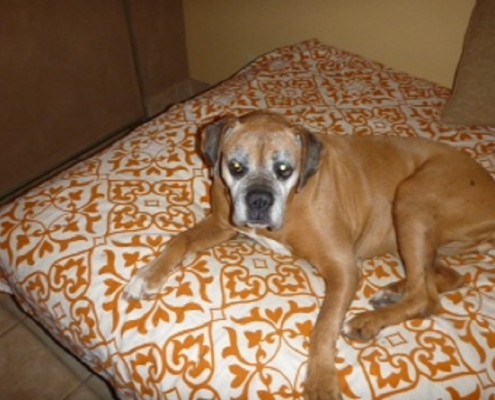