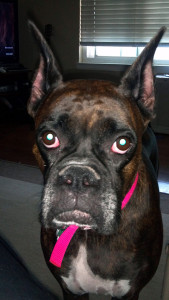 It is with a very heavy heart that I write this today. Almost 4 years ago, Gretta (aka Momma) came into our lives as a foster from NCBR. She was in bad shape physically and emotionally and was a timid girl scared of her own shadow. During her initial exam, it was noted that she had some heart issues, but the extent of the damage wasn’t known till a few weeks later when more diagnostic tests were done.

In the meantime, Gretta saw what it meant to be loved and pampered and what it finally meant to have a home. She bonded so strongly with us and our Boxers, and even though we tried not to get too attached (she was still a foster at this point) she stole our hearts and we were hooked. She went from this shy girl to a goofball that was the life of the party. She thrived off the love we gave her and the camaraderie she had with her Boxer brothers.

When we finally got the results of heart diagnostics, we realized that her heart issues were more severe than we could have ever expected. The vet said that her heart was a ticking time bomb and the best case scenario was that we would have 3 months–max. The vet said that it wouldn’t be inhumane to euthanize her due to the severity of her issues and that she wouldn’t be able to be adopted out. At this time she wasn’t showing any outward signs of pain, just some exercise intolerance. I know that vet had good intentions, but our family is forever grateful that NCBR didn’t give up on her and gave Gretta the chance to keep going until her body said that it was time. We knew we wanted to be there for Gretta until the very end, so formalized our adoption. We were prepared to give her the best 3 months of her life.

Gretta managed to hang in there for almost 4 years. While we had many scares along the way, we truly believe that love kept her going longer than anyone could have ever expected. I know she fought so hard to stay with us because she finally found what she had deserved all along. Last night her body told us it was time. It was the hardest decision that we ever had to make, but we knew that we had to do right by her. Our hearts are broken but we wouldn’t trade the time we had with her for anything in the world.

We miss you Momma, and we will always love you. 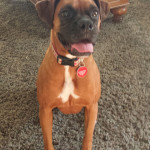 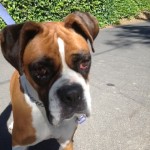