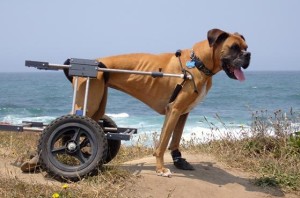 Chris and I wanted to let you all know that our little Pasta is no longer with us. After suffering seizures yesterday, we decided to put her down. We don’t know the cause of the seizures but we took it as her sign that she was ready to go.

It had been over a year since she was diagnosed with Degenerative Myelopathy. Over the past year, we watched her battle with the slow onset of the Myelopathy and had discussed many times when to put her down. The difficult question was made ever more complex by the fact that her illness put her in no real pain. It had instead just debilitated her slowly. All along, we hoped that Pasta would make the call for us though.

She let us know that she was ready yesterday. We had planned on taking her to the beach for one of her favorite activities lately, watching things. She loved to watch birds, people and especially other dogs. As we were packing up her wheelchair and other necessities for a fun day out, she started to have a seizure. Our plans quickly changed and we brought her to the vet where they sedated her. After a few hours of observation, they cleared her to come home with us. We brought her home but she wasn’t the same. She continued to have small seizures. We saw a little bit of her in between but knew she wouldn’t return to being herself. After a few hours of comforting her, we decided that it was best if we brought her back to the vet. We showered her with love and kisses and gave her a positive send off.

Pasta was a great little companion to us both and we know that many of you were very fond of her. Thank you all for your love and support.