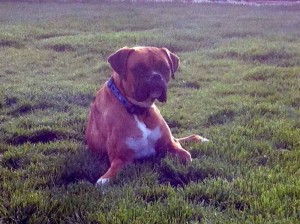 Charlie came to us all the way from Bakersfield extremely emaciated with a bad hind leg that had atrophied quite a bit. X-rays were inconclusive as to what exactly was going on and we didn’t want him to stay in boarding at the vet clinic until it was determined what exactly was the matter. Poor guy had clearly been through enough so we took him home to rest and be loved until he could be looked at further; hoping for the best but knowing we may need to prepare for the worst.

Immediately Charlie’s charm took us by storm. Usually we let the boxers decompress and rest when they first come home; typically they want to be alone in a quiet place… not our Charlie! He told us in his own way he wanted to play with our fur babies and who am I tell this cutie on 3 legs what to do? Charlie played and ran and boxed all day and then rested right next to us in his bed next to the couch. He watched our every move and got up when we got up, went to the back door when he needed out?… however the stairs were a bit too much for him in his fragile state. You could tell he wanted to go up so badly and would stare up the stairs and whine so we picked him up and carried him upstairs at night and downstairs in the morning. By day 2, Charlie decided he didn’t want us to carry him anymore, he decided he was going to do it himself no matter how long it took him on one back leg. He backed away from me when I knelt down to pick him up and started to slowly go up on his own. We cheered him on the entire way and wow did that little boxer tail wag to no end when he made it up to the top!

Charlie had his good days and bad days but he always had his wiggle butt going and would roll over for a good belly rub or a nice pat on the head. He’d meet me at the door when I’d get home from work and chase me around until he felt he got enough attention. Charlie was a super sweet boxer that really touched our hearts. Even though Charlie was only in our home for a short time his can-do, happy spirit left a lasting impression on us forever. RIP Charlie, run free sweet boy. 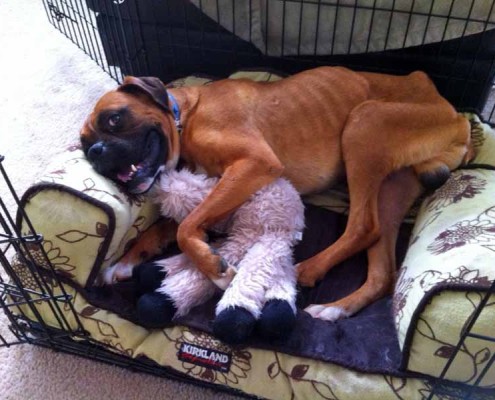