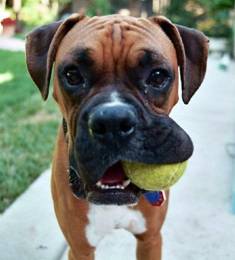 There are some dogs that are truly exceptional and that is the story of Marley. Marley was named after my boxer Mudbone and his real name on his pedigree (also a rescue dog) was Marley.

April, 2004 I noticed Marley on NCBR’s web site, I called to adopt him. He was originally known as Dallas and came rounding the corner with the vet tech in tow. He jumped into the passenger seat of the truck and was like OK let’s go.

He could have been search and rescue. Some dogs are food oriented, Marley was toy / object oriented. You could have 30 toys and if there was one in particular, that’s the one he wanted. You could hide it he would search and find it and remember the next day Even if you forgot, he remembered and would stare at you until you realized what he wanted. The only boxer that would play ball and loved it.

We have had a wonderful 8 years with Marley, but not long enough. The last year Marley has been brave while we tried to diagnose what caused him to lose 20+ lbs. in less than two months. After numerous tests the closest diagnosis, a form of ALS. Marley has been one of the smartest and best dogs ever. He has been alert and engaged mentally, but just like people with ALS, his muscles are gone, unable to eat or drink on his own, unable to bend, and recently in pain.

Run pain free, in your prime and join Geneva, Tara, Davis and your name sake Mudbone. Wait for us at the bridge.