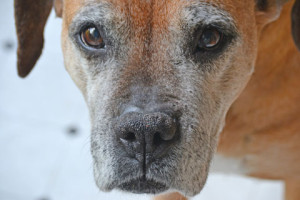 Chloe – adopted from NCBR in 2002 – at about 1 and one half years, She was a beautiful sweet dog, who sadly had been abandoned by the side of the road. She soon became a part of our household which included a golden mix named Max – they became inseparable – and sadly both developed terminal illnesses within weeks of each other at 13 and 15 years. So when it was time we went to the vet – they died snuggled next to each other -it was a good death.