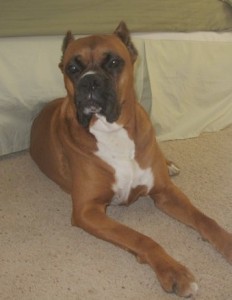 We got Herman at the end of July 2005. I loved him the second I saw him on the web site but my wife was not crazy about his ears she said they made him look mean. But after meeting him we all agreed that he would be the next family member. He got along great with our English Springer Spaniel which was very important to us because we inherited him when my father in-law died. In Feb 2008 we found out that Herman’s right knee was going to need surgery and the left would also need it soon after. So we had the first one done in March and the 2ND one done in June. Boy did that make a difference he was even more loving and happier after they both healed. If I know Herman, I would bet that that’s how he showed us how grateful he was for fixing his knees. My favorite thing was having him with me in the garage while I was working on something. I’d like to think that was his favorite thing too. Monday July 19th was one of the worst days of my life. That was when we had to put him down because the cancer was too far advanced in his throat and chest. Cancer, that has to be the ugliest word in the world. We are not sure exactly how old Herman was, probably he was around 7 or 8. We do know that we had 5 wonderful years with him and we will never forget him.