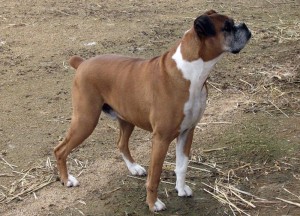 This is my beautiful 10-year old Boxer, Marcus:

Marcus had been through NorCal Boxer rescue twice and fit right into my household. He loved to travel. He was adored by his kitty, “Smudge”. We did lots of walks and some agility until he became too clumsy. He was diagnosed with degenerative myelopathy, narrowing of the spinal cord, in March of 2009. The following October, we started using “Walking Wheels”. We walked every day to keep him active. His general health began to decline in the fall, but he was real trooper right up to the end. He tried to keep on going, but it was not to be.