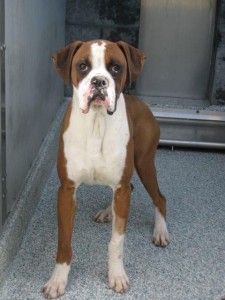 Rigby’s story represents both sides of the Rescue experience. Rigby was hit by a car in Southern California and had a collapsed lung and a head injury when he arrived at the shelter. His head injury caused increased intracranial pressure resulting in some neurological deficit. In coordination with LA Boxer Rescue and West Coast Boxer rescue, NCBR was able to get him into our care.

Rigby fought through his injuries with valor.

While undergoing his veterinary exam with NCBR, the veterinarian heard a severe heart murmur and a lot of irregularity in his heart beat. NCBR provided fluid and support in case the murmur was worsened by dehydration but after 24 hours of hospitalization and volume support, the murmur had not changed. NCBR performed a cardiac ultrasound which showed that Rigby’s blood supply coming out of the heart was almost non-existent due to a severe narrowing of the aorta, and also showed that Rigby’s cardiac pressures were extremely elevated due to this narrowing. An EKG showed a frequent life-threatening arrhythmia. NCBR’s vet and the ultrasound vet both determined that Rigby could not survive long with this underlying pathology and NCBR made the painful decision to help Rigby over the Rainbow Bridge, so that he did not die struggling from the consequences of his pathology. It is very sad that such a beautiful boy with so much will to live had been dealt such a severe cardiac diagnosis.