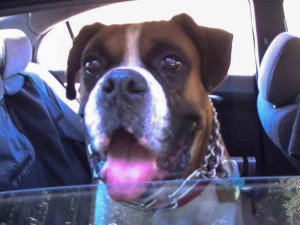 On June 20, 2012, Dooby went to the happy hunting ground. It remains one of the saddest days in my life and now that he’s gone, I wanted to share with you a bit about his life after we adopted him from Norcal Boxer Rescue.

Dooby came to his forever home from NBR on March 5, 2006, a skinny guy still healing from being fixed. We knew he’d had a rough life and I think he knew those days of hunger and abuse were over when he walked through the front door. Dooby and I bonded right away, and much to my family’s disappointment, I was his favorite. Within the first few days, we got a crash course in separation anxiety, and learned the hard way, that Dooby was a “runner,” leash and collar a must, and he needed the security of his crate when no one was in the house.

It didn’t take us too long to realize Dooby was very “unboxer.” There was none of the usual boxer energy and silliness, which was fine with me. He loved to cuddle on the couch and wherever I went, he followed right behind me. From room to room, for over 6 years, he was my shadow.

We knew there was a story behind his mellow behavior and in February, 2008, we got our answer. Out of the blue one morning, he could hardly hold himself up. We couldn’t find anything wrong. He hadn’t been bitten by something or eaten something he shouldn’t have. The only thing we could think of is he might have fallen off the couch during the night. So off to the vet we went for blood tests and x-rays. After a bit, in comes the vet with a stern look on his face asking me how long have we had Dooby and what we knew about him. I told him he was a rescue dog and we’d had him a couple of years and showed clear signs of malnutrition and behavior characteristics consistent with abuse. Why? Doc showed us the x-rays which revealed massive calcium deposits along his spine, which for a dog his age (5 or 6) wasn’t common. The vet’s demeanor changed when he knew we weren’t responsible for Dooby’s condition and we just wanted to care for him. Conclusion, Dooby was in chronic pain… No wonder we got a long so well as we shared common pain from back problems.

While we were sitting in the waiting room waiting for the results of Dooby’s tests, my then 8 year old son, sees a flyer on the bulletin board “Boxer free to good home.” “Oh, mom…” So Camie, the little runt boxer joined the family. And she’s all boxer, albeit only about 2/3 the size. She brought a bit of hidden spunk out of Dooby and Dooby must have taught her these things:

Dooby did not like men… it took him quite a while to warm up to my husband.
Dooby especially did not like men in hats.
Dooby was the top dog. He got the spot by the bed or on the couch closest to me.

Over the years, Dooby went everywhere with us we could take him. It was day trips to Yosemite, Fort Bragg, Bodie State Park, camping, visiting family. The later years, it was the two of them, Dooby and Camie. This past year, we could tell by the now well graying face and physical features that Dooby was an “old man” dog and wouldn’t be with us too much longer. Even so, I wasn’t prepared for how quickly the end came as he was sick for less than a week. Poor old fella, his kidneys gave out. We figure he was somewhere around 11 or 12 years old when he died, and we are so happy he was able to spend the second half of his life in spoiled comfort and love.

The four pictures I included are of Dooby, two during his first summer with us on one of our day trips to Yosemite and Bodie State Park. The other two were last summer near Loon Lake. The other boxer is Camie, who turned 10 last October.

It hasn’t quite been a month and I still miss Dooby so much. He was a big part of our family and he’s left a hole in our hearts that only time will heal.

Thank you for all that you do for these wonderful dogs. Hands down, boxers are the best. 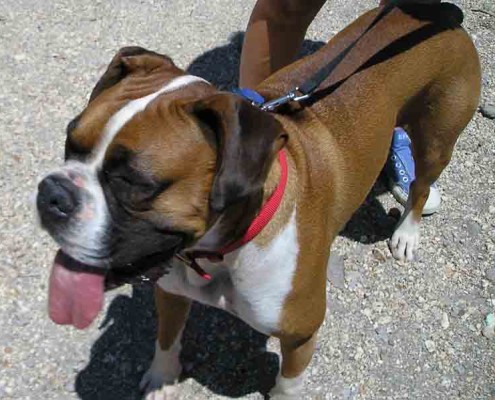 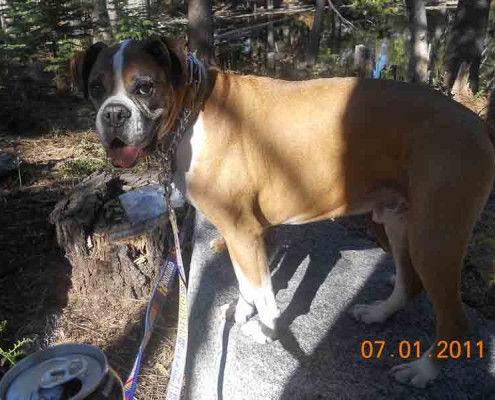 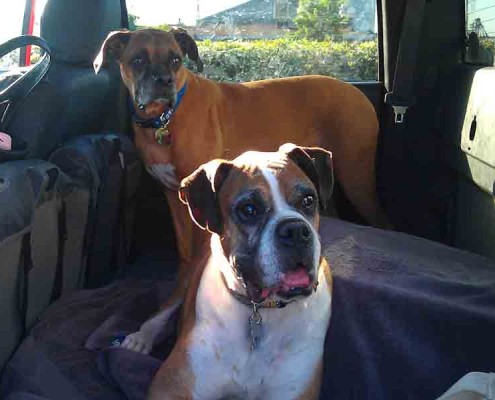