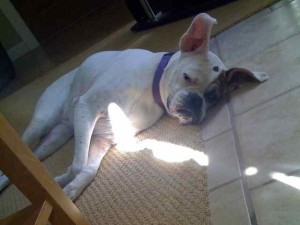 Roxie, the older white female we rescued over a year ago, died this morning

JAX and Jenn took extraordinary care of Roxie over the last eight months, knowing that this would be the outcome – yet they still opened their hearts to Roxie

Roxie came to us with multiple lumps which we removed. Those lumps turned out to be hemangiosarcomas, a blood borne cancer. We did an ultrasound looking for signs of internal organ involvement, and there was none at that time.

We were hopeful that because we had removed the lumps and there was no internal involvement, that Roxie could be adopted. Shortly after JAX started fostering Roxie, however, she started growing more lumps at a very alarming rate.

It was evident that Roxie could not be adopted, but it did not matter because she had already found her permanent home with JAX and Jenn. They provided Roxie the love and care she so richly deserved

Roxie’s health has slowly declined and she undoubtedly had internal organ hemangiosarcoma involvement. She died of a cardiac arrest this morning

We are thinking of you JAX and Jenn and we are grateful for what you gave to Roxie, especially knowing that your time with her would be short.