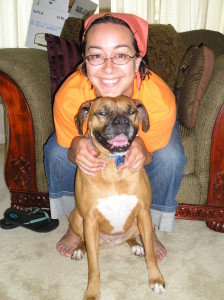 Tess meant so much to our family and it’s difficult to express that in words. We were so fortunate to find her at the adoption fair six years ago, just before Greg and I got married. I looked at her and she looked at me and we knew we were family! While I was taking a turn around the fair with Tess on the lead, the wonderful volunteers from the Boxer rescue were talking to Greg about how well we moved together–like we were meant for each other. He agreed and Tess went home with us that very day.

Everyone we met fell in love with Tess at first sight: all of our friends and relatives and even the good people at Mueller Pet Medical Center. She was great with people of all ages–even our rowdy nieces and nephews didn’t faze her! Tess brought us so much joy with her warm eyes, goofy Boxer smile, puppy kisses, and non-stop energy. Within only a few weeks, Greg and I could not imagine our lives without her. So it was with great concern that we noticed some oddities in her behavior a few months ago, including a big drop in that energy–and one day, Greg noticed that she just “blanked out” for a few moments and fell over unconscious. She got right back up, but he took her to our vet, Dr. Gosink, who suspected a seizure. Around the same time we had noticed a few lumps and had them biopsied to check for cancer cells, but at that time all the Dr. Gosink found were fat cells. Still the lumps continued to grow, especially one fast-appearing one under her left foreleg; when this lump started to make Tess favor the leg rather than put her weight on it, we asked the vet to remove it. During the surgery, Dr. Gosink said she found a non-fatty tumor under a capsule of fat, and it was located in such a place that she could not remove it without causing more damage. She sent it to be analyzed and it came back as an aggressive type of soft-tissue sarcoma. We were devastated at the prognosis but hoped that we could keep her safe and comfy for at least a while longer. That was three weeks ago. This past Tuesday morning, just one day after the staples and E-collar had come off from the surgery, I woke up and Tess was not moving. She barely responded to my petting her and did not want to get up–not to eat, or anything. Tess’s breathing was so raspy and shallow. I called Greg and took Tess to the vet, who was concerned because this was such a drastic change from the day before. When she x-rayed Tess, Dr. Gosink came to show us the results, stating the cancer had moved into her lymph nodes in her chest and was causing fluid to fill up the chest, cutting off her air and making her heart struggle to beat. She said we could try to drain off the fluid but it would come back, and even radiation would not rid Tess of the cancer. Greg and I sat with our little girl while she went to sleep forever; we hugged her and told her what a beautiful and wonderful dog she was and how much we loved her. When she was gone, our hearts and home did not feel the same. It seems so quiet and empty in our house without her. We will miss her very very much and long for the day when the clatter of Boxer feet and the joy of Boxer smiles and the warmth of Boxer trying to fit its 50+ pound self into our laps returns to us.