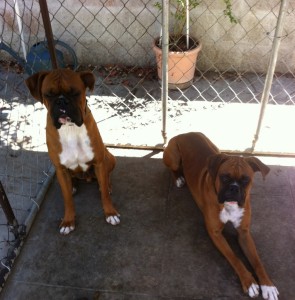 On 9.4.12 these two precious boxers were on their way to the safety of NCBR. Their owners made the terrible decision to crate them in the back of an open bed truck for the drive from San Jose to Sacramento. According to the owner he was stuck in traffic for several hours and when only a few minutes from his destination (NCBR’s vet), he discovered the dogs were dead. We at NCBR who worked very hard to get these boxers in to our program are very devastated! The owner had only two complaints, 1) that he was in traffic so long he didn’t get to eat and 2) that NCBR would not take in his “dead dogs” and dispose of their remains. A NCBR volunteer said it very well, ” I can only hope you NEVER own a single living thing (plant, cat, dog, bird, fish, turtle, flea or anything that consumes oxygen).”